History of the Parish

The village of Hilderstone is situated in the centre of Staffordshire approximately 5 miles from Stone. To the south lies the county town of Stafford and to the north is Stoke-on-Trent.

The road through Hilderstone from Cresswell is thought to have come into existence in Roman times as a track that linked up from the known Roman Road from Rocester to Chesterton near Newcastle under Lyme and leads to the earthworks at the end of Whitesytch Lane – an area known as ‘Hollywood’. It is along this track that the village has evolved in a linear form including Eastholme at the southern end.

Hilderstone was known about in Saxon times (670AD) and then mentioned again in the Norman Doomsday Book of 1086 AD. The Saxon village was known as Heldulvestone and has had many alternative derivations in various records. One such record showed that the village comprised of “6 households, 2 villagers, 2 smallholdings, 2 slaves, 3 plough lands value £0.5 to a Robert Stafford”. The Saxon strip farming is still visible today on the hill behind the church, some sitings can also be seen behind the Old School.

In Medieval times many of the timber Manors in Staffordshire were moated, one of these sites can be seen in a field close to the present day Hilderstone Hall, the associated fish ponds to the moated house are still there today, however only the depressions of the moat are left. 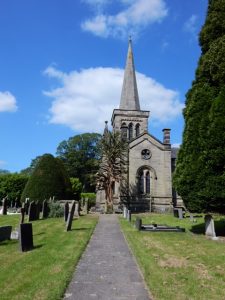 Many of the nineteen Grade II listed buildings date back to the late 18th century. The main road through the village is the B5066 from Stafford to Leek and at one time was a toll road, now it is an alternative road to the A34 going North.Hilderstone has always been a farming community and in the 19th century the Bourne pottery family established a new Hall, Church and School c1833. A Wesleyan Chapel was built c1822 at Eastholme. In the 1990s it was converted to a residential property.

Records from the 19th century show that the village was self-sufficient with three public houses, a bake house, a shop, a blacksmith and many artisan industries to support the local farms. 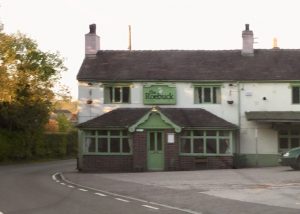 Today things have significantly changed with only one pub the ‘Roebuck’ surviving, and Hilderstone Hall is a residential care home. The remaining industry is Hammonds of Hilderstone a garage that provides a comprehensive service to the local area for cars and commercial vehicles.

Over the last century the popuation has fluctuated from approximately 300 inhabitants to a total of 468 in 2013. The increase was brought about by a new housing development now known as The Meadows where in excess of 60 houses were built by different developers starting in the late 1980s and providing a mix of executive style housing and affordable housing. Unfortunately the village does not have a school and local children travel to Milwich and Stone.